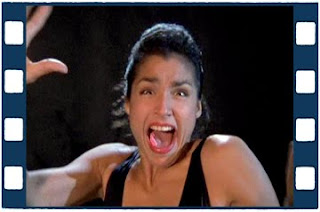 Last night I created still images to be the chapter markers for the DVD. It was a little tedious to do, but one of the last remaining steps in getting the DVD finished. Now all I have left to do is finish the commentary track, author the final DVD and then burn the thing for the duplication guys.

Wow, I guess that's still quite a bit. A few more days, but getting closer.

I was going through some boxes of Creature stuff in the basement and came across a bunch of miscellaneous notes. It's fun to read back through all this stuff and see what I was thinking at the time.

There were two notes that were particularly fun. One was a journal entry from the one-year-anniversary of the start of shooting and the other was our first report to the film's investors, in which we noted that the film was more than a year behind schedule and had gone over budget by... $10.64

My hunt for actors and crew members continues. There are a couple of folks who are proving devilishly difficult to find. I wouldn't mind so much except that there are a few tantalizing clues to their locations scattered about the vast Internet, but all of them seem to be dead ends. Maybe I will start printing their pictures on milk cartons.
Posted by Jim Hardison at 4:44 PM