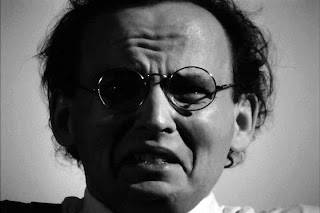 Last night, I fixed the final remaining "day for night" shots from the opening sequence of the Creature, and it only took 21 years.

See, back in October of 1989, we had to shoot a scene where gangsters drag a guy out onto a pier to give him a pair of "cement overshoes". Of course, this kind of work is best done at night, but we didn't have a lighting package scheduled for the shoot and we only had a skeleton crew that day, so we decided to do it "day for night" by putting a filter on the lens that was supposed to make the blue sky look dark. A production team with a real budget and shooting schedule would have shot test footage to make sure the effect worked, but... 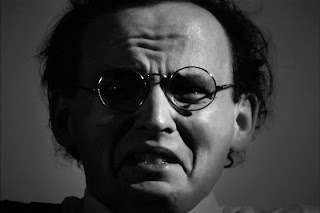 Because we were shooting film, we didn't realize until days later (when the film came back from the lab) that the effect hadn't worked at all, so it just looked like the gangsters were doing their dirty work in broad daylight. We had no idea how to fix the problem and didn't have any money for a re-shoot, so we just added fixing the scene to our growing list of "deal with it later" issues, where it stayed until last night.

Jim Barrett, the engineer at Downstream Digital where I did the film transfer, was able to fix a bunch of the other shots four years ago, but there were a handful that still looked like daylight--mostly close-ups of the lead actor from the sequence Bob Hartley, who played Patrick. Anyway, last night I made mattes for the shots and darkened them appropriately. Now it looks like it was supposed to. Finally!
Posted by Jim Hardison at 10:30 AM